Behind the bloody beaches of D-Day and the deathly bloom of mushroom clouds in the bright desert, behind supercomputers and the weather app on your phone, there is a mainly unrecognized group of young women who wielded the power of math to change the course of history.

Throughout World War II, women were recruited into government service to be human “computers” or mathematicians who focused on all types of calculations from weather to plane flights and artillery firing tables. For the latter work, they quantified the angle, trajectory, and velocity of different ammunition to ensure the accurate bombing and shelling of enemies on land, sea, and air for troops in every theater of war. Much of this recruitment and activity took place at the University of Pennsylvania, where recruitment prioritized math majors, and quickly shifted to any woman with a high school math education due to rapidly increasing demand for anyone able to assist with the war effort.

Contributing to combat operations was only the beginning for many of these recruits, several of whom lent their efforts to the coding of supercomputers. In contrast to cultural attitudes today, this was firmly considered “women’s work.” The construction of hardware and the physical engineering was where the men were most valued. Though, according to Jean Bartik who worked on the Electronic Numerical Integrator and Computer (ENIAC), the ladies got to know the engineering specs quite well themselves. The ENIAC was the first electronic, programmable, digital (as opposed to human) computer. It was first used for calculations to develop the thermonuclear bomb, but was also employed for the first successful numerical weather prediction. It contained 18,000 vacuum tubes and weighed more than 30 tons; occupied roughly 1,800 square feet and consumed 150 kW of electricity.

Jean was part of a small team that helped to program the ENIAC, and she provided these insights:

“Occasionally, the six of us programmers all got together to discuss how we thought the machine worked. If this sounds haphazard, it was. The biggest advantage of learning the ENIAC from the diagrams was that we began to understand what it could and what it could not do. As a result we could diagnose troubles almost down to the individual vacuum tube. Since we knew both the application and the machine, we learned to diagnose troubles as well as, if not better than, the engineer.”

The six women that worked on programming ENIAC and provided the coding foundation for numerical weather prediction went on to work on other atmospheric and physics computing projects as well. Kay McNulty assisted Dr. Douglas Hartree in his work on calculating laminar boundary layer flow in a compressible fluid, and Jean and Adele Goldstine worked on the interaction of  planes and shock waves with Dr. A.H. Taub of the University of Washington.

Among all these women, however, the most prominent may be Klara von Neumann, the wife of that very John von Neumann who helped develop the atomic bomb and was the inspiration for Stanley Kubrick’s Dr. Strangelove. A national champion figure skater as a teen, Klara ended her formal education in mathematics after high school, but wound up working for the Office of Population Research at Princeton after immigrating to the United States with her husband. From that experience and her natural talent for mathematics, she came to help her husband program the computers and projects that cemented his fame. She oversaw the perfection of the ENIAC programming and took the lead on programming for the meteorology project. Without her efforts, it could have been much longer before programs could be stored on computers, and the weather apps on your phone might never have been built. 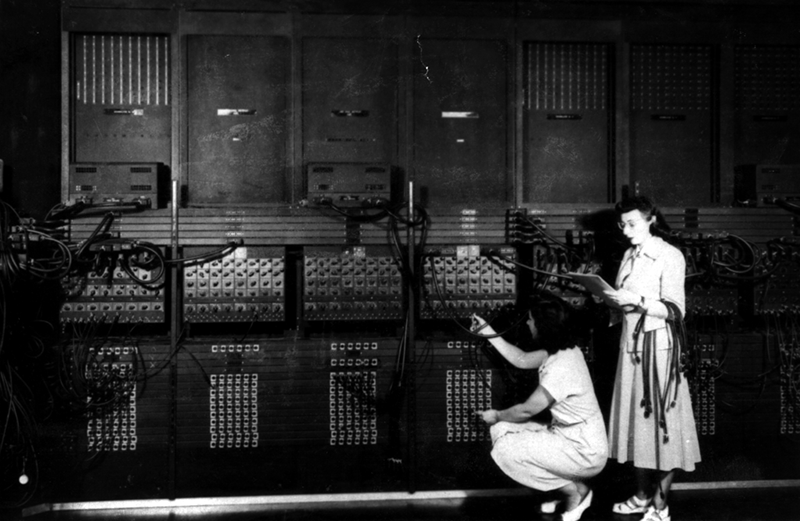 Standing is Marlyn Wescoff and crouching is Ruth Lichterman as they re-wire part of the ENIAC with a new program. Photo by an unknown U.S. Army photographer. Courtesy of the archives of the ARL Technical Library.