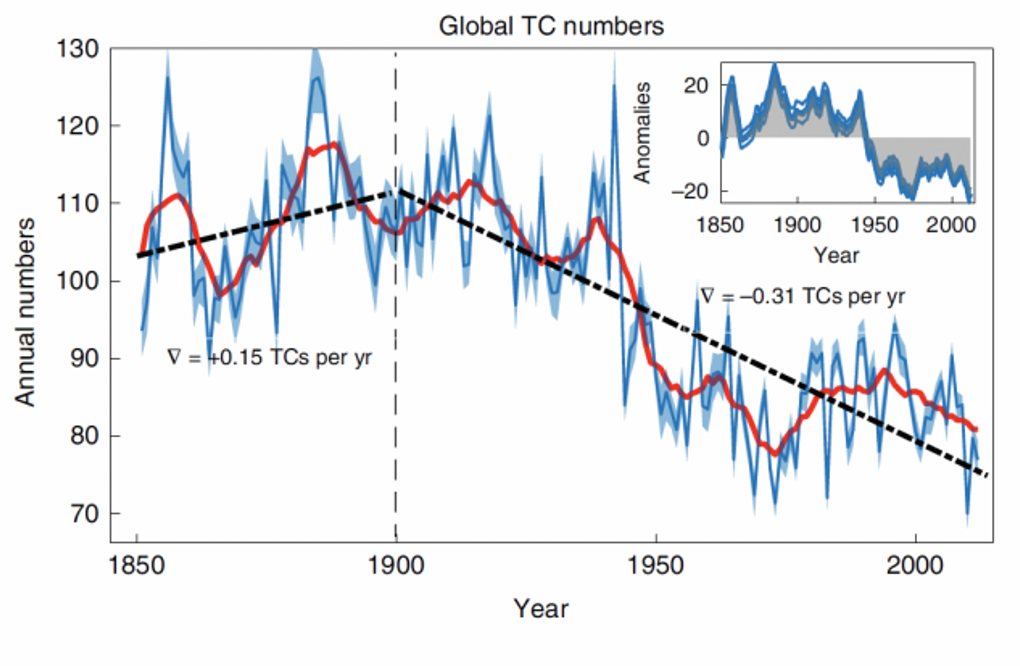 PROBLEM: Tracking changes in the annual number of tropical cyclones over time is challenging because satellite monitoring only started in the 1970s, and prior to that, storm records mostly came from ships when they happened to encounter a storm. “Only hurricanes that affected people’s lives were known and reported,” notes Suzana Camargo of Columbia University. As a result, scientists have been unable to determine long-term hurricane trends.

SOLUTION: Camargo and colleagues created an algorithm that identified tropical cyclones back to 1850 in the Twentieth Century Reanalysis (20CR) dataset, which uses historical global climate observations to reconstruct weather patterns. The 20CR assimilates only sea level pressure reports, which were consistently recorded by weather stations and ships over many years, making it more reliable than other reanalyses. After confirming their results with climate model simulations, the researchers discovered that the annual number of tropical cyclones across all the world’s oceans declined by about 13% for the period 1900–2012 compared to 1850–1900, with an even greater downturn of 23% occurring since the 1950s. The models determined that the decline in the number of storms is connected to anthropogenic climate change—specifically, warming global temperatures disrupt global atmospheric circulation patterns, stifling convection that can spark hurricane growth. The one exception to the decline is the North Atlantic basin, which includes the Caribbean Sea and Gulf of Mexico, where hurricane totals have increased over recent decades. The researchers believe this could be a rebound in storms because of recent air quality regulations in Europe and North America. (Other recent research has shown a correlation between the number of storms and air pollution levels.) “People have been doing different attempts to try to figure out what happened with other datasets, using different methodologies, so I see this paper as another piece of the puzzle,” Camargo explains. “We do not have data in the past, and we cannot go back and be there now, so this paper is trying to recreate in a different way [than] has been done so far what has happened in the relation to number of tropical cyclones.” The study was published in Nature Climate Change. [Sources: CNN, Columbia University]

FIGURE CAPTION: Time series of ensemble-mean global TC numbers for each year (blue solid line) and the ensemble spread at the 95% confidence interval (blue shading), long-term trends in the ensemble-mean annual TC numbers for the preindustrial and the twentieth-century periods (black dashed line and the associated gradients ∇), and the five-year running mean
(red line). The inset at the top right shows the anomalies of annual TC numbers (with respect to the entire period). [Image Credit: Chand et al. (2022), Nature Climate Change]

Cover Photo by NASA on Unsplash