Technically defined as “a mesoscale lightning flash that is at least 100 km long” megaflashes can span hundreds of miles and create multiple lightning strikes far away from the convective core of thunderstorms, coming seemingly out of the blue or calm gray skies. This phenomenon has only recently been described and is still the subject of research. By exploring megaflash characteristics and locating the areas where these types of strikes most often occur, this study argues for the need to increase the precision and effectiveness of lightning safety warnings.

“When thunder roars, go indoors!” is an often repeated safety slogan during summer months in the United States. Lightning safety groups have offered a few variations on safety messaging: one working group with the national American Meteorological Society promotes the 30-30 rule, where lightning is considered dangerous if less than 30 seconds passes between the sound of thunder and the flash of lightning. NOAA, however, urges everyone to seek safety on any sound of thunder, and this new study of megaflashes underscores why. The data show that the 30-30 rule does not adequately protect against the possibility of lightning strikes from a megaflash event.

This work, which was supported by the United States Department of Energy through Los Alamos National Laboratory, focuses on a new analysis of lightning data from the Geostationary Lightning Mapper (GLM). This detector, which was placed on the GOES-16 satellite, offers researchers an immense amount of data to help understand and analyze lightning behavior and occurrences. However, study authors Michael Peterson and Greg Stano recognized that there are limitations to the data that the GLM collects: megaflashes don’t actually leave a specific signature in the data. In order to overcome this problem, the team had to recluster the data to understand where flashes were being wrongly identified as separate events due to technological limitations of the GLM. They then supercharged the data set by combining it with strike data from the Earth Networks Global Lightning Network (ENGLN). That way they were able to identify when a megaflash occurred and where/when it was accompanied by lightning strikes on the ground.

This identification process was key to the output of this study, as the authors were able to pinpoint the largest megaflash production zones in the Great Plains of the United States and the La Plata basin of South America. These areas are well known for mesoscale convective systems (MCS) which produce large, wide spread banks of electrified clouds. This is the perfect environment for megaflash development, as they draw on the large banks of electrified stratiform regions that are outside the convective core of the storm. This creates a unique hazard environment where these lightning strikes can build across hundreds of miles. 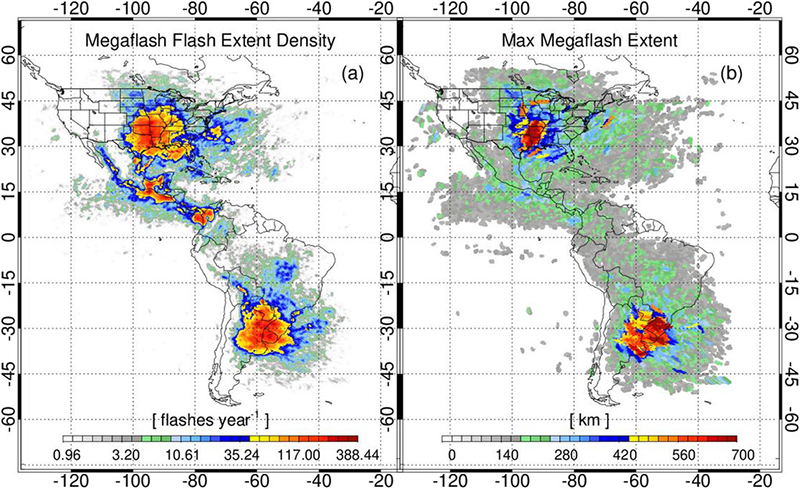 Hemispheric distributions of GLM megaflash activity depicted as a (a) FED and (b) peak megaflash extent in the 1 Jan 2018–15 Jan 2020 record.

With the megaflash zones identified, further questions arose about the number of strikes produced along these horizontal lines of electrified clouds. The study analysis showed that the largest megaflashes, which can travel upwards of 400 miles, actually produced more strikes than shorter megaflashes. And the strikes could often be very highly charged. So while the 30-30 rule may work for many lightning safety warnings, this study concluded that megaflashes present a unique risk, especially in the Great Plains and La Plata basin: “there is no safe location below an electrified cloud that is producing megaflashes, and current lightning safety guidance is not always sufficient to mitigate megaflash hazards.”

So always remember to keep your lightning safety protocols handy and when thunder roars, head indoors!

This news item references the study "The Hazards Posed by Mesoscale Lightning Megaflashes" by Michael Peterson of the Space and Remote Sensing Group, Los Alamos National Laboratory, Los Alamos, New Mexico and Geoffrey Stano of the University of Alabama in Huntsville, Huntsville, Alabama. The article was published online in Earth Interactions on 18 May 2021.

Figure reproduced with permission from the American Meteorological Society. Copyright remains with the AMS.

Jan 26, 2022
From Observation to Contribution: Connecting Citizen Observations to the Study of Mesoscale Weather