An important key to improving weather forecasts, especially short-term forecasts on regional scales, is increasing the amount of observational data that can be assimilated into the computer forecast models. While remote sensing from satellite and radars continues to be enormously important, direct measurements from instruments such as those making up a weather station, called in-situ measurements, add great value. When looking at increasing the observations available to forecast models, adding more surface weather stations helps, but there is a huge need for more direct, in-situ, observations above the surface that can augment in both time and spatial coverage the twice daily radiosonde observations. With a spacing averaging 300 km (186 mi) and normal observations only twice daily, radiosonde data often misses important smaller scale details that can be critical in creating a successful computer forecast of a mesoscale weather event. Meteorologists sometimes refer to the lack of direct observations in the lowest few kilometers (couple of miles) of the atmosphere as the “in-situ observation gap” (see Fig. 1).

In recent years, a great deal of work has been done to explore the use of uncrewed aircraft systems (UAS) to fill this gap. (The term UAS was originally defined as “unmanned” aircraft systems, but there is growing convention to use “uncrewed” to remove the gender from the term.) The technology of UAS platforms (often referred to as drones in common usage) has been improving rapidly, and it is now becoming cost effective to use this approach to provide routine lower atmosphere weather observations as a way to improve by the frequency of these observations and their spatial density. Small weather-sensing drones, designated WxUAS, have become quite sophisticated and are capable fully autonomous operation, automatically progressing through all stages of flight including takeoff and landing, profiling, system checks and recharging (See Fig. 2). 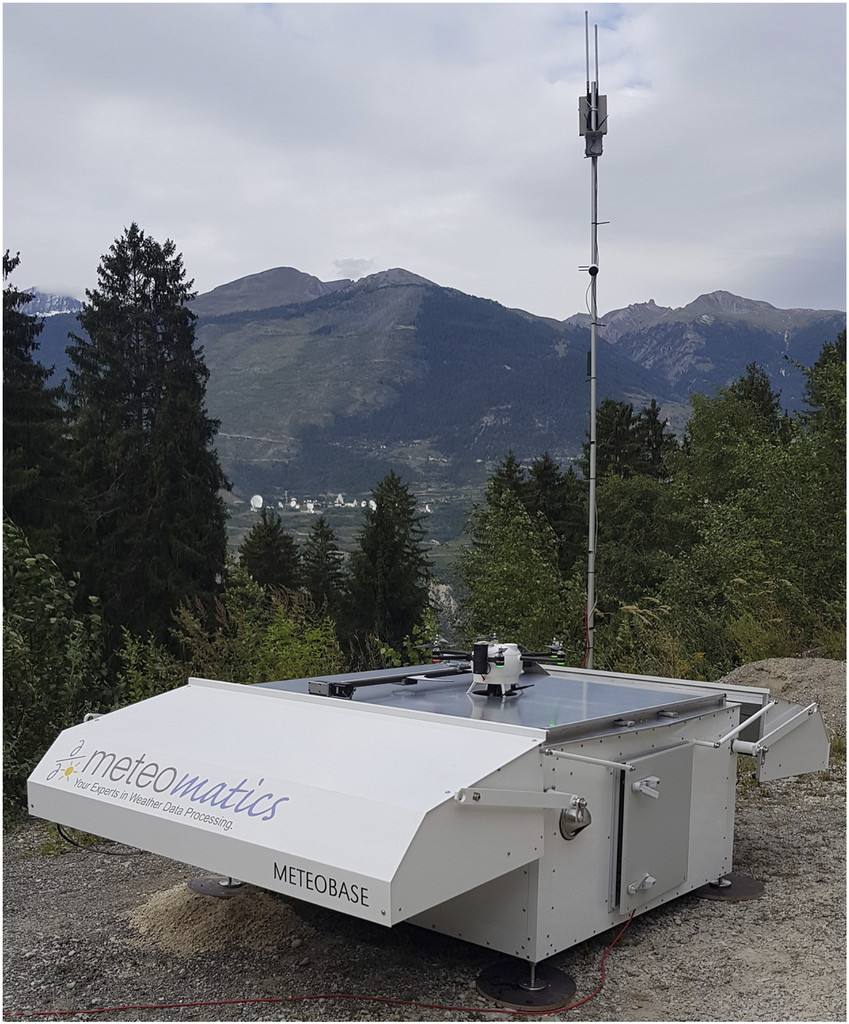 Several programs are currently underway to test the impact of using routine WxUAS observations in operational forecast settings. For example, Oak Ridge National Laboratory in Tennessee is using WxUAS flights to obtain up to eight profiles per day that are transmitted to the Morristown, Tennessee, Weather Forecast Office (WFO) in near real time to support their short-term forecast desk. Early indications are that forecasters have felt this addition data on the lower atmosphere has helped them increase the skill of their short-term forecasts of winds, fog, and thunderstorm initiation. Research is also underway to assess the impact of routinely incorporating WxUAS data into computer forecast models. Earlier single-event tests have indicated noticeable improvement when this additional data is included, but longer term studies will provide a baseline that can establish the value of an expanded program to use WxUAS systems as part of the operational data collection system.

There are some obstacles to such an expanded network of WxUAS systems, however. First, of course, is the cost. While it has been shows that operating a WxUAS system can be comparable to the operational cost of a radiosonde station, that cost is still significant. As the technology improves and costs go down, it may be more feasible to deploy WxUAS systems a larger scale. There are also issues to resolve in terms of operating WxUAS platforms reliably in a wide range of weather conditions, and some concerns about the accuracy of the observations obtained. While most WxUAS are relatively small and lightweight [less than 25 kg (55 lbs)], there are concerns about the possibility of an out-of-control UAS causing damage to structures or possibly injury to people. Several of these issues are wrapped up in the regulatory framework controlling UAS flights (not just for weather observations, but in any context).

It is important to note that the use of UAS for commercial operations is expanding as a way to deliver packages or medical supplies. Many commercial UAS already carry basic weather instruments (temperature and humidity sensors, for example) in support of their operational use. It is conceivable to imagine those commercial UAS providing continuous weather data in flight in a way very similar to how commercial aircraft routinely provide weather data during their flights. (The data from commercial aircraft is routinely assimilated into the weather prediction models and has been shown to have a significant impact in improving forecast. These important in-situ observations are noted in Fig. 1.)

Whether from the growing fleet of commercial UAS or from a network of automated WxUAS, it is very likely that uncrewed aircraft will play an important role in addressing the need for more in-situ observations in the lower atmosphere.

This article has been adapted specifically for the AMS Weather Band from the longer article “The Status and Future of Small Uncrewed Aircraft Systems (UAS) in Operational Meteorology” [link: https://journals.ametsoc.org/view/journals/bams/102/11/BAMS-D-20-0138.1.xml] by James Pinto and coauthors. Figure 2, and some additional information, came from the article: “Improving High-Impact Numerical Weather Prediction with Lidar and Drone Observations” [link: https://journals.ametsoc.org/view/journals/bams/101/7/bamsD190119.xml] by Daniel Leuenberger and coauthors.

Any errors and omissions may be attributed to AMS staff. Copyright remains with the AMS.

May 3, 2022
Gaining a better understanding of the actions people take during a tornado emergency