Fern Kirkman: The First American Woman to Earn a Degree in Meteorology

During World War I, meteorology became an increasingly important piece of military readiness. This connection, especially between weather and flight, played a critical role in bringing many men and women into the world of forecasting and weather prediction.

In the United States, two meteorology programs were started in the period between the world wars. They were part of the aeronautical engineering departments at the Massachusetts Institute of Technology (MIT) and the California Institute of Technology (Cal Tech). Both programs were made possible by funding from the Daniel Guggenheim Foundation. The Foundation's interest in meteorology was part of their interest in advancing flight technology and knowledge in the United States after World War I. The programs began in 1928 and 1933 at MIT and Cal Tech, respectively. Cal Tech did not admit women until the 1950s, whereas MIT has always been coeducational. Nevertheless, there were no women graduates from MIT's meteorology program until 1940. As remembered by former MIT professor James Austin:

"A women pioneer in meteorology at MIT was Margaret Whitcomb. "Peg" as we knew her, was an MIT undergraduate who selected the General Science option as a major. She received a bachelor's degree in 1939 and had some exposure to meteorology. In fall 1939, she was a graduate assistant in meteorology and completed the master's degree . . . [She] subsequently married Professor Raven in Languages at MIT and I doubt that she gainfully applied her expertise in meteorology [after marriage]."

But before Ms. Whitcomb entered MIT, the College of Engineering at NYU started a master's degree program in meteorology under the direction of Athelstan Spilhaus in the Fall of 1938. Spilhaus was a student of Carl Rossby, who was again connected to the Guggenheim Foundation. The program at NYU also received support from the Guggenheim Foundation, but it was given official "departmental status" as opposed to the adjunct status associated with the programs at Cal Tech and MIT. Full departmental status was not given to the programs at MIT and Cal Tech until 1941. 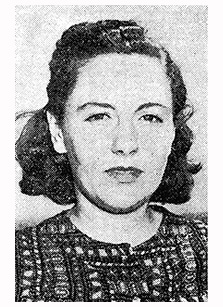 Fern Kirkman, a graduate of Hunter College in New York City, had entered NYU's College of Engineering in 1937. Once the Department of Meteorology was created, she immediately enrolled. She received the master's degree in June 1939 and became the first woman in the United States to earn a degree in meteorology.

An article in the 26 June 1939 New York Tribune focused on Kirkman, who had just been hired as a forecaster by the American Export Airlines at Floyd Bennett Field in New York City. Professor Hurd Willett of MIT helped organize the weather forecasting unit at the airport and, according to the Tribune article, "Willett suggested that the staff include two women meteorologists." Quoting Kirkman in the same article: "They couldn't find two [women], so I'm the only one in the [forecasting] department." An image of Kirkman working at the American Export Airlines can be seen in the Smithsonian National Air and Space Museum archives.

The final statement in the article reads: Serious about her career, she has recently taken the examination for junior meteorologist in the United States Weather Bureau, but has not yet heard the results. She said a number of other women . . . took these examinations, so evidently there was no official aversion on the part of Uncle Sam to the idea of "weather women."

Records from the United States Weather Bureau indicate that there were no women meteorologists on the staff in 1938. It is probable that Kirkman was the only woman who obtained a meteorology degree from NYU during the pre-WWII period. Verification is difficult, however, since records from NYU's meteorology program are not easy to access following the department's demise. Little more is known about Kirkman and her career, but she was one of the important trailblazers for women in meteorology.